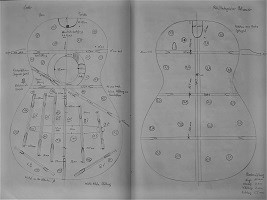 Stamped internally “AM” (designating that it was constructed by Ramirez worker Antonio Martinez), this is one of the primary instruments the great Andrés Segovia owned and played from 1969 until 1980, as documentation from José Ramirez III attests (in translation): “…the classical guitar number 3.339…was habitually played by maestro Segovia in his concerts, during 1969 and successive years”.

The construction and the internal design is based on the typicall construction method. Double ribs and the popular scale length of 660 mm of its time generating a lot of power, what surely has been the reason for Segovia playing this guitar in his concerts.

It is such a rare privilege holding an instrument of this caliber and historical value in your own hands and considering that the original guitar has a polyester finish, a replica with frensh polish would increase projection and harmonics.

Fotos of the Original