How does a guitar work?

The functionality of the guitar essentially means the creation and production of the sound of a guitar. What is really behind, when you play the guitar and its sound spread into the room?

Basicly, the pluged string sets the entire guitar in vibration. These vibrations are transmitted through the air to the human drum field and is getting hearable in this way.

In the following text, I would like to explain how this process is taking place in detail.

As an introduction for a better understanding about the functionality of the guitar I would like to start with an example of the vibrating string.

A single guitar note is not only existing by one frequency. It contains a fundamental and numerous, harmonical overtones, forming at least the timbre of each note. For example, by plucking the string close to the bridge, the high harmonics are much more pronounced than the lower ones, forming the timbre of this note bright and sharp. However, if you pluck the string at the sound hole  the fundamental and the lower harmonics are more pronounced. The colour changes into a dark timbre.

The harmonics of the vibrating string could be also declared as so-called ‘oscillation modes’. This is very importance for the further understanding of the functionality of the guitar.

The body as amplifier

However, the pluged string on its own wouldn’t be able to set enough air in motion to produce a sufficiently loud sound. Therefore, the string is coupled to the guitar body which is working as an amplifier. The vibrating string transfers its energy to the top of the guitar.  The top again transfers its vibrations to the surrounding air. This is why a ‘note’ actually is hearable.

These vibrations, mainly generated by the top, are not visible by eye but physically measurable and are illustrated below.

As you can see, all top vibrations are mainly generated below the sound hole and in various patterns. These vibrations or so-called ‘resonances‘ or ‘modes‘. They are divided into antinodes (fields of vibrations) and nodal lines (no movement). With increasing frequency, the areas of vibration are changing into much smaller parts. They can be considered like the overtones of a vibrating string. The only difference is that the modes of the top do not appear in a harmonical relationship.

As already mentioned, the vibrating string transfers its energy to the top. The top starts to oscillate and the moving modes are setting the surrounding air into motion. So called sound pressure changes. This air movement is essentially the mechanical amplification of the body which finally can be heard as a guitar note.

From this point of view it is absolutely necessary to pay primary attention in building a good ‘air pump’ that can provide sufficient sound pressure.

The intensity of the sound pressure can be determined by special measurement methods (FFT-Analysis) for each mode. In this way you are getting informations about the tonal qualities of the guitar, such as an individual fingerprint.

FFT-Analysis | Fingerprint of the Guitar 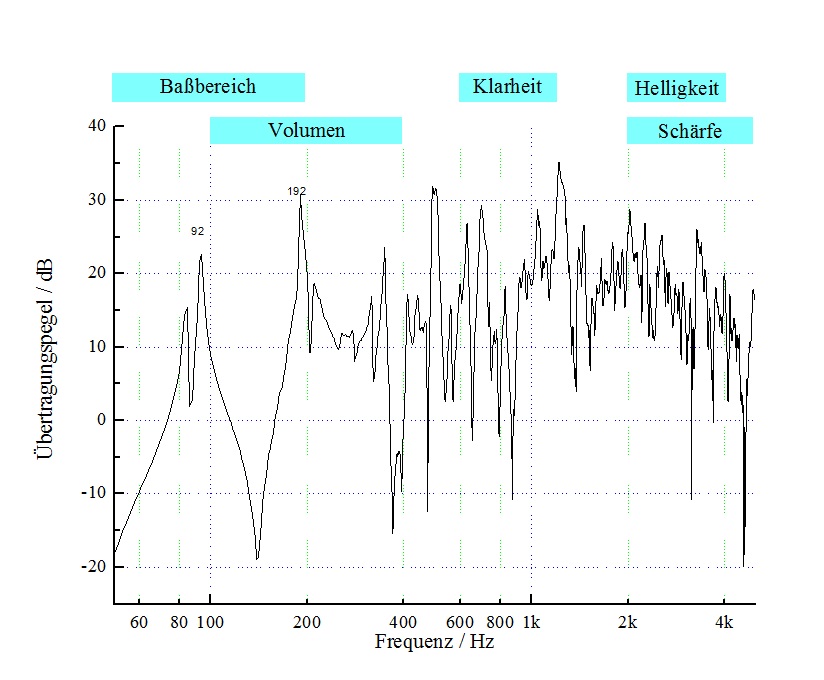 Each peak typifies a mode (top vibration) pronounced differently in their intensities, forming the timbre and character of the guitar. These peaks can basically be seen like the controller of a conventional equalizer. controling the timbre of the guitar by changing the intensities in certain frequency ranges.

For example, if you increase the intensity of the high frequented modes, you are getting a guitar with a bright and clear sound character. By strengthening the vibrational behaviour of the low modes you will achieve a dark timbre and voluminous sound.

Thus, the air resonnace for example, depends,among other things on the thickness’s of top, back and sides.  Its frequency location delivers informations about the future bass radiation of the instrument. Therefore the tone colour of a guitar with a low tuned air resonance sounds darker, rounder, more voluminous than another guitar which is tuned slightly higher. The air frequencies of different guitars can usually be found between F 87.3 Hz (tuned low) and G # 103.8 Hz (tuned high).

If you are measuring the air resonance during the construction and you are thinking that it’s too high, you can for example by reducing the thickness of the top, lower the resonance.

A special feature that occurs in relation with the resonances are the so-called ‘Wolfnotes’. Surely every musician probably have heard of. A wolf can usually be clearly distinguished from its neighbouring notes because its decay time is much shorter and its sound character is rather disturbing.

These wolves can be found all over the entire fingerboard. The two strongest are located on the low E string in the range of F sharp and on the third string on g. This however, also can be varying by one or two semitones from guitar to guitar.

This phenomenon is easy to understand by regarding the frequency curve of the graphic above. When the frequency of a played note is hitting a resonance peak of a top vibration with a similar frequency a faster transfer of energy between strings and body is taking place and the note is dying more quickly.

For example, in our diagram we can see a resonance peak detected at 192 Hz. The third string note (g) has a frequency of 196 Hz. Therefore both frequencies are very close together. The vibration of this top resonance is extracting almost the whole energy of the plucked g-string in at once in terms of a very fast attack and decay time, the characteristics of a wolf note.

Accordingly, each resonance peak, visible in the diagram are potential wolf notes, which can more or less be noticed all over the entire range of the guitar. This peculiarity is inescapable, because the functionality of the guitar is based on these resonances and body vibrations, without the guitar couldn’t sound.